We and selected third parties use cookies or similar technologies for technical purposes, to enhance site navigation, analyze site usage, assist in our marketing efforts, and for other purposes as specified in the Cookie Policy.
Accept
Reject

Maybe someone can help here or put two "connects/cents" in on the topic. Today I ran out of connects on the Free plan with two more days till the monthly renewal. A client contacted me off site this morning and says "urgently need you, apply for this job" with a link. Well, I'm still new and didn't think about the invite feature so I jump on to apply and can't. Needed more connects anyways so I chose to upgrade my membership. Afterwards, I was only issued 66 connects and not the 70 that it states.

Support has not sent a response on the matter in 12 hours but the ticket keeps showing the recent activity time being updated.

Aweek and a half ago I had another issue. So I've been active on upwork for 3 weeks. Started getting jobs my first week. Nothing crazy but every one completed has left 5 star feedback and had absolutely no issues. Then last week, I received an email from upwork stating that they wanted to help me since I was new and were making me part of the rising talent program. This would include a profile badge and a free additional 30 connects within 24 hours. 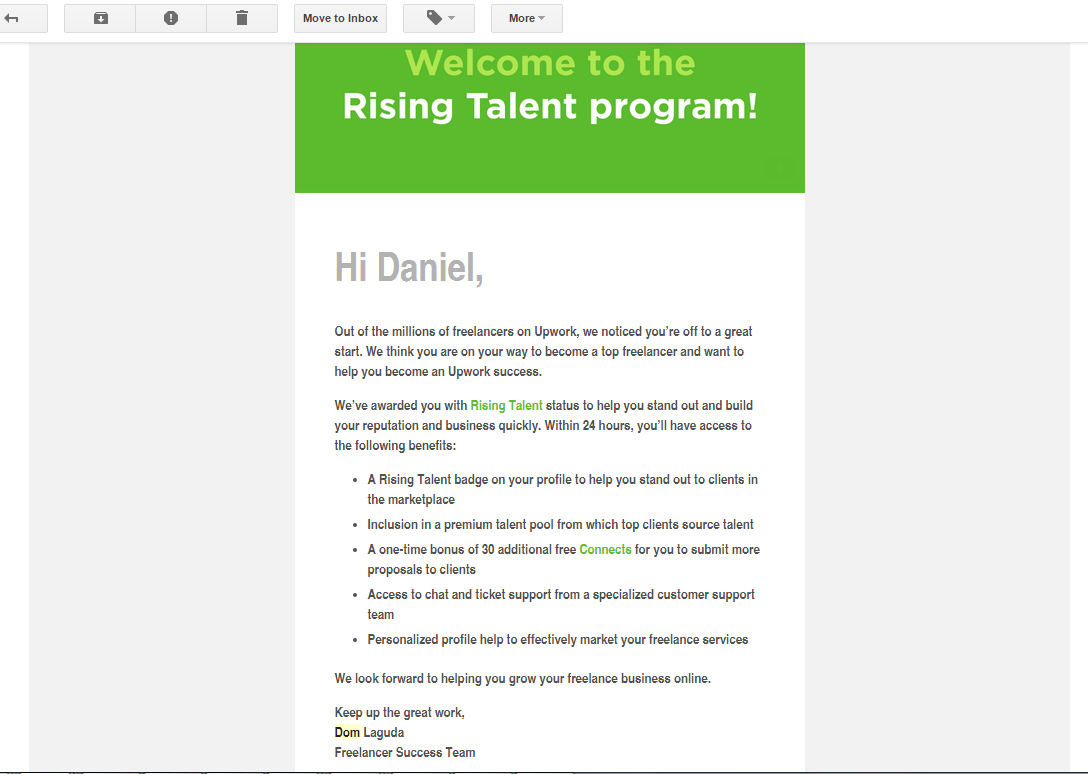 The next day, I go to my profile and the badge is there but no extra connects awarded. No biggie... Then another day passes and I get a second email from upwork stating that they are temporarily removing me from the rising talent program. The email states what is required to be part of the program and I've met all the requirements so I don't understand why they are kicking me out two days later. 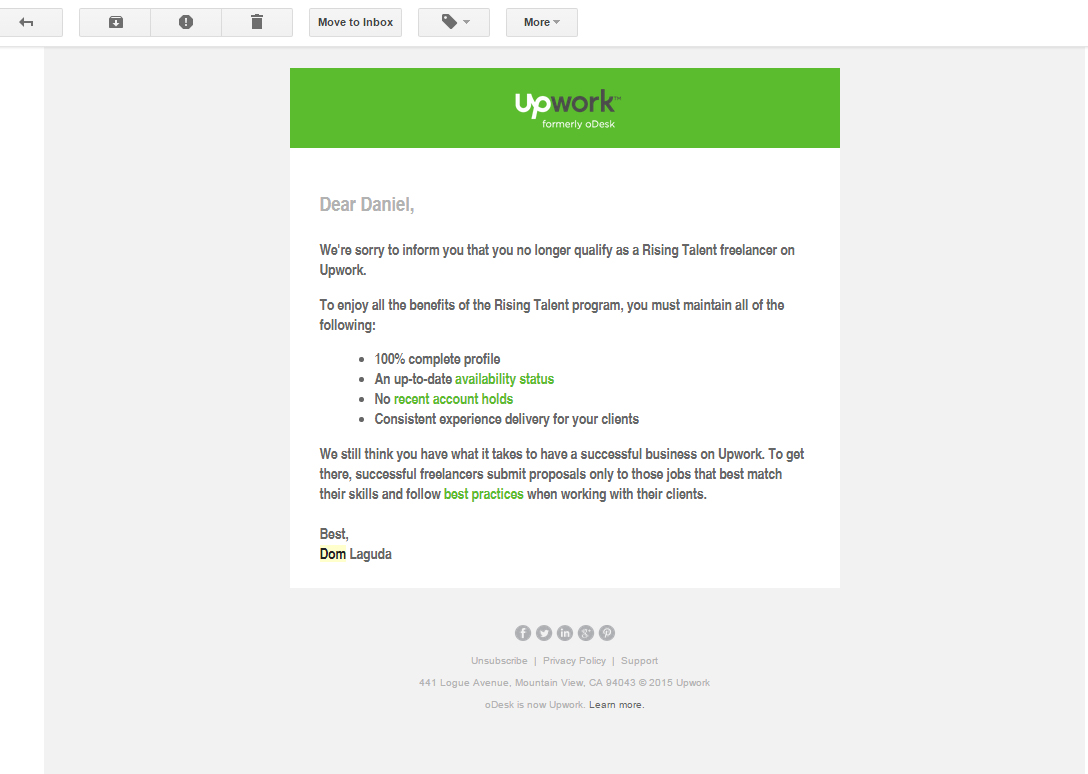 I contacted support via live chat and after waiting over an hour I'm told that I was never part of nor offered to be in the rising talent program. Why did I get the badge... Why did I get the emails? I sent the screenshots and she says that she will forward my ticket to the "proper department". That was a week and a half ago with no updates on that ticket since.

I called the phone number on the contact us page in California to see if I could get some kind of solution to these issues. It actually had a customer service menu which was surprising. It puts me on hold with a robo voice repeating every min or so... "You are #1 and have been on hold for... minutes. A customer service agent will be with you shortly". That went on for 20 minutes and then it says "All of our agents are too busy assisting other callers, please go to our support center and open a ticket for a fast response to your problem". Ha!

Why is it that a business with full access to the worlds biggest population of freelancers and outsourcers... A company that takes a slice of 10% off of thousands of jobs a day... Doesn't have a better/faster support system with more agents. I also signed up with the freelancer site at the same time and have zero complaints about them. Plus there 10% fee that they take is maxed at no more than $5 with relatively close pricing on bids. I think at this point I'm going to cancel my membership, do a paypal dispute to get my money back for the incorrect connects and move on to somewhere that actually looks out for the people who put money in their pocket.

Sorry for the rant... I began this topic looking for help. Like with the phone system earlier... It kept saying that I was #1 but in the end I was abandoned. You can't get a bigger cosmic sign then that!

I have no idea about the Membership issue but a week ago I also got the "Rising Talent" Mail.

One day later I got a new mail "Welcome back to the Rising Talent program" - Not sure how I even left it within that day. Anyways, I also had to open a ticket and after 1-2 days I got the 30 connects to my account.

I woud guess that becoming a top rated freelancer getting your JSS canceled your rising talent status before you even got the 30 connects.

Sebastian N wrote:ticket and after 1-2 days I got the 30 connects to my account.

I woud guess that becoming a top rated freelancer canceled your rising talent status before you even got the 30 connects.

Where do you see Top rated?

Oops, sorry, I meant JSS. I will have to edit that. Thank you.

(That's what I meant from the Rising Talent Badge)

Afterwards, I was only issued 66 connects and not the 70 that it states.

Phone Support is busiest during PST peak hours. If you call outside those hours (they are 24 hours from 9pm Sunday PST to midnight Friday PST) you are more likely to get straight through

dcc1784
Member
In response to petra_r

I appreciate your answer to the connects issue but it doesn't make it right. There is no mention of this pro-rated dedudction prior to upgrading. It only says that you will get 70 connects a month at $10 a month. So, I paid $10 to basically get a two day headstart on the monthly free 60 connects and an additional 10 at $1 dollar per connect. I just lost $4 without any notice before hand that I would. That is not fair in the slightest and to take any amount of money from someone without their prior agreement is theft no matter how small or large. I was very excited to become part of the upwork community when first joining and unfortunately not even three weeks later my opinion has changed entirely on the business and it's best practices. Not on the community and I really appreciate you taking the time to provide your input.

I'm so sorry about your experiences. I've responded to your ticket on Zendesk. You're doing an amazing job! Congratulations on your 100% Job Success Score and graduating from Rising Talent. Feel free to contact me if you have any more questions or concerns. Thanks!

For the Rising Talent Program - galling though it must be to have lost out on the connects - frankly, if you could see some (not all) of the profiles of freelancers that Upwork considers to be 'rising talent', you would not wish to be associated with that particular segment.

Daniel C wrote:I also signed up with the freelancer site at the same time and have zero complaints about them. Plus there 10% fee that they take is maxed at no more than $5

so they are more expensive at small contracts up to $ 50, and the same afterwards

And take a look at all the other fees - such as

I can help you about your missing connects. It's no mistake but rather some kind of a "marketing trick".

Despite promising you "70 connects with each new billing cycle" (and the moment you upgrade to the plus plan you also upgrade/change your billing cycle) they subtract the connects that you used already.

I even asked CS BEFORE I upgraded my membership whether I would get 70 connects (cos after having blown all 60 connects during my first week the promise of 70 additional connects for only $10 sounded just too good to be true lol).

If she had said I will only get 20 connects PLUS I have to wait an additional 1 week for the refresh because my billing cycle would be renewed I'm not sure I would have done it.

So, well done Ruth because I still pay $10 each month for my membership up to this day but it's totally worth it for me!

I wanted to clarify how membership and connects work.

Upgrading your membership plan is giving you an additional 10 connects for $10. It is not $10 for 70 connects, because Freelancer Basic is already giving 60 connects for free, which comes out to be 2 connects per day (1 application).

Again, we will give you 10 connects for upgrading and 10 connects prorated (5 days x 2 connects/day) and you already received the 60 original connects from Freelancer Basic, which means this month + 5 days billing cycle you get 80 connects.

I hope this clears it up. Please let me know if you have additonal questions. You can read more about Membership and Connects here.

dcc1784
Member
In response to dianachoi

Thank you for your help Diana!

I would like to make a suggestion since this prorated thing is confusing without it being broken down before hand. Why not give everyone the ability to buy additional connects without upgrading, then offer bulk discount tiers for upgrading?

That is the main reason why I upgraded and I believe why many others do too. People are in need of more connects and ready to spend money with you guys at that moment but after they upgrade it gets confusing. After seeing how many connects I actually received, I started trying to figure out the math and it made no sense. I didn't know if it was an error or intentional, but guess what it did... It took me out of the buying mood. Then I had to spend time searching everywhere for answers because support was really slow which lead to frustration and a bad buying experience.

The model just doesn't work well from a marketing standpoint. Targeted buyer is ready to spend... Let's tell them that it is as easy as 1..2..3.. and let them discover it's not. Step one, take their money. Two, don't give them what they thought they paid for. Three, let them search and wait for answers.

I'll bet that if upwork offered the ability to purchase connects at $1 each without upgrading they would see higher sales volume on connects alone, happier customers and less money wasted for unnecessary related support issues. Continue to offer an upgrade plan but take off the 10 bonus connects feature. Then if people want the competitor bid range option or dicounted tiers for connects, they upgrade! With the right discounts, membership upgrades would increase too. Everyone wins!

Thanks Daniel! I appreciate your feedback and will forward it to the team. 🙂