Hi. I received a 1-star feedback for a 7-hour job i did for an agency. It was really depressing and i was wondering if there's any way I can ask/request the client to change his feedback to a more favorable one? Could I give back what he paid me so he can change it to a better feedback?

Roselle, that's terrible. When you wrote you did this "for an agency", you mean the client was an agency, perhaps even an Upwork agency, and not that you're with an agency, correct? In that case, you could certainly ask them to change the feedback, but not for a refund because that's feedback manipulation. However, if you refund all money, then the feedback will go away, although any private feedback that was left still remains.

Out of curiosity, did you ask why they left you 1 star feedback? Unless it's a mistake, a client would have to be extremely unhappy to do that, so I don't think it's likely they'll change it, but asking about it can't make it worse than it already is.

petra_r
Member
In response to yitwail 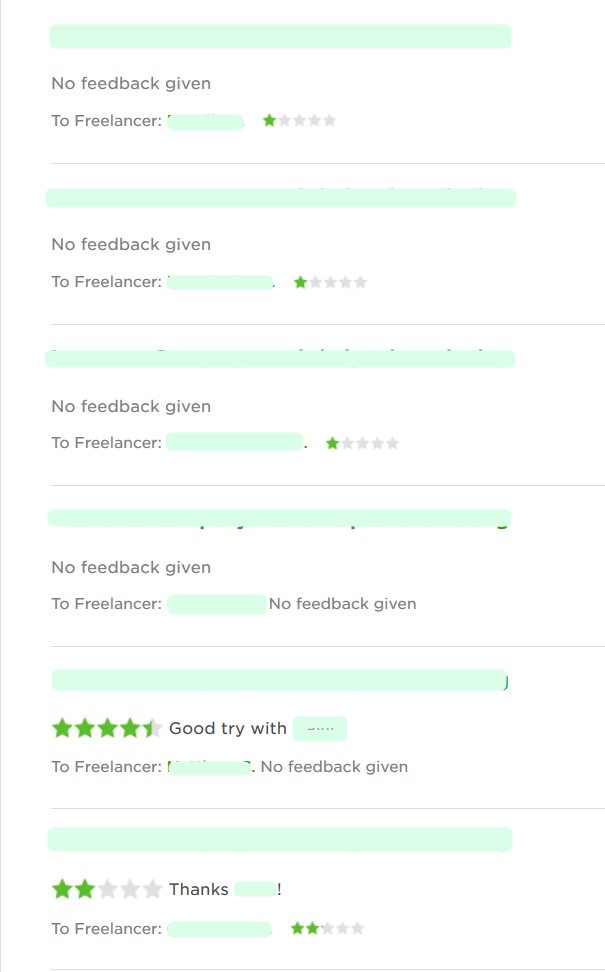 lysis10
Member
In response to petra_r

that's what ya get when you work for cheap. nothing good comes from that

I'm sorry about the outcome of your recently completed contract. John is correct, you can ask the client to edit their feedback and enable this option on your end, or issue a full refund which will remove their public feedback from your profile. However, in both of these cases private feedback they left won't be amended or removed, and will continue to be counted in your Job Success Score.

Vladimir, we are constantly told that feedback from clients with a really poor history of outcomes are excluded....

did you SEE their feedback history?

If that does not indicate a "history of poor outcomes" I would be genuinely fascinated to find out what does.......

Community Manager
In response to petra_r

We do conduct regular reviews and flag client accounts whose contract and feedback history qualifies for having their feedback excluded from their freelancers' Job Success Score calculation. I'm following up with the team regarding this client and have asked for a review of their work history and feedback they left and received. Thank you for bringing up and sharing information about this initiative.

versailles
Member
In response to vladag

So it's not automatic. The client has to be reviewed manually.

Community Manager
In response to versailles

The review process is partially automated but I'll ask our team to manually review this case.

petra_r
Member
In response to versailles

So it's not automatic. The client has to be reviewed manually.

Maybe it's because the client DID give one freelancer two stars..... It's only all the others that he gave only one star..... Probably Not bad enough for an automated "Beep-Client-Detector" to flag......

lysis10
Member
In response to petra_r