I just feel like responding to your points from my viewpoint (as someone who's been at 100% for a reasonable amount of time), as I think you make some valid points but I'm not sure your proposed solutions are the best ideas, either.

1) The client's feedback is not taken into consideration while calculating job success score.(i.e. all clients are considered equal, even if they are just time wasters)

Are you trying to say that, as a freelancer, your rating of the client should dampen the impact of your JSS? This is a very bad idea, giving the freelancer the ability to avoid a JSS hit simply by rating his client badly.

2) Its often buggy and the exact method of calculation is not provided to us. Thats certainly not good as there are many people who depend on odesk for their living and they OUGHT TO KNOW how is this metric calculated.

Yeah I mean, I understand Upwork's point here, it would be abusable if someone knew the calculations. However, security by obscurity is the flakiest layer of the onion. If the JSS score was accurate and well-developed, it wouldn't be a problem for it to be public.

3) Sudden introduction of this metric would kick out more experienced freelancers out of business. We should have been notified of this before this stat is incorporated into our metric. We would have been more careful in selecting clients, particularly on odesk/upwork.

I agree it would have been nice to have more warning. I think that screening clients is probably the most important skill you can have here - now more than ever - beyond, you know, the thing you actually do for a living.

4) If client does not end our feedback and disappears and/or leaves a feedback late, the system seems to deduct the job success rate from our profiles. Now its logical to think that what can a freelancer do in such cases?

I've had two jobs - one of which is my highest-paying fixed rate job - ended without feedback recently and my JSS hasn't been affected. The client simply got a cushy job somewhere and didn't have time to continue with the project. He was very happy with the work, but he never logged back into Upwork to leave feedback even after asking him a couple times 😞 I think this is the biggest problem for sure. There are clients just here for one-offs that don't come back to leave feedback sometimes. I wonder if JSS should consider it worse to have bad feedback if the client usually leaves feedback. Seems logical, but somehow I doubt it's calculated like that.

This thread received some good responses.

I started this discussion about 2 years ago and things are very different now. I personally feel that job success score algorithm is more stable now as compared to what it was when it started.

I too have matured more as a freelancer myself, now being a top rated freelancer for 2 years consecutively 🙂

Also time and again upwork is offering us reduction in fees for new clients(who just sign up for upwork during the scheme) and the best thing is that you can have your feedback removed from them as they said in this email: 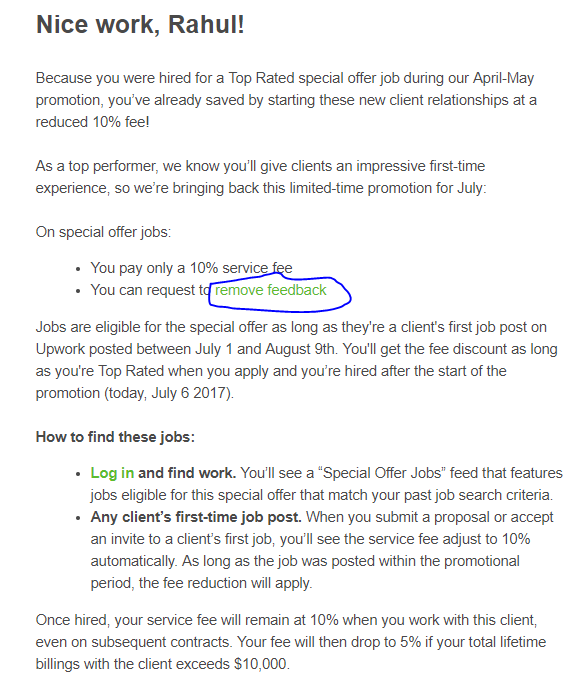 So overall I would appreciate the system and thank the people concerned for hearing!

Now I would like to share a few things I have learnt during the time since JSS started. (these points are just opinions and as JSS algorithm is not public, hence they don't need to be accurate):

1) Always check client's reviews before taking the job. More importantly, check the RECENT REVIEWS because many clients I have seen mature on how they deal with freelancers.

2) Even more important than 1), check what reviews THE CLIENT GIVES TO FREELANCERS!

This does not directly appear on the client's history section, but you can get this indirectly by visiting the hired freelancer's profile(if public). This way you can find the less amiable people and hence avoid bad private/public feedback

Particularly check for the RECENT REVIEWS. Here too I have seen many clients maturing with time in what reviews they leave for freelancers.

Quality freelancers don't prefer working with clients who don't give good reviews. Hence clients often tend to learn this as they become more experienced with the platform.

3) Exercise severe caution while taking up a contract even with the best employers. Focus  on the requirements of the job and don't just jump onto it.

It seems that your job success score would be affected after you have accepted the offer and not able to complete the job(pls someone correct me if I am wrong)!

4) Prefer long term/recurring contracts from your previous clients rather than ALWAYS looking for new people(except when upwork's fee reduction offer is there).

Its easy to deal with people you have already worked with as most likely they are going to appreciate your work (that is why they have hired you again!)

And another point I want to mention about the refund system and its effect on JSS.

Its true that giving a refund is a tool often misused by poor quality freelancers. I too was of the opinion that this should not be allowed UNTIL I encountered a client that was simply piling up his requirements as and when I used to deliver(without changing the budget). Somehow, working day and night I managed to complete his job and we ended the contract!

At that time(and still I am) I was a 5* reputation holder and JSS metric was not there at that time. So I had to give it all to retain that reputation. But I was shocked to see a 4.85 review after that contract was over.

So in that instance I had to give a refund to get my 5* reputation back.

There can be instances when client may be at fault, trying to take the freelancer a hostage on his reviews/JSS. So in that case a refund would make sense to preserve one's profile.

I support refund system because:

1) Nobody likes to give a refund because not getting paid for what you have worked would be the last thing one would want. And often budget is beyond what one is capable of refunding.

2) Many freelancers have their livelihood dependent on upwork (profile). While the same is not true for majority of the clients. So it would make sense to give this much security to freelancer

Though I agree that there must be restrictions to avoid its misuse, but it would not be bad to give a little degree of flexibility or benefit of doubt to the freelancer!