When on Elance we were assured by both Elance and Upwork mods that the 'hidden' section relating to our proposals had been disposed of.

I have just been emailed by a client who says that he can't see all of the proposals without searching for a section marked 'more'.

Are all proposals being given equal exposure?

Oh, and I did a screenshot of the 'promise' that proposals would no longer be hidden.

All submitted proposals go under the "Applicants" tab. The client can sort the proposals by how relevant they are, how recently they were submitted, price and hours worked by freelancer. When the list of the proposals is long, the client needs to click on "More" to load more proposals.

You can find more information about the new Applicants page and screenshots here.

I'm not talking about how the client sorts them when they are all in, I'm talking about how Upwork decide who goes first and who ends up in the 'more' section. Which, incidentally, is no different to the 'hidden' section except by virtue of the word itself.

I'm not talking about how the client sorts them when they are all in, I'm talking about how Upwork decide who goes first and who ends up in the 'more' section. Which, incidentally, is no different to the 'hidden' section except by virtue of the word itself.

That's a question I would like answering too. - Who is put at the top of the list by default?

Valeria - what is the default order of applicants in the Applicants list? (I'm hoping it's by date applied - seems fairest to me).

I'm hoping that too.

However, on some 'nameless' sites, it isn't by date order it is by the algorithym selection. I actually don't have a problem with this because I too can see what the client sees. I know where I am on the list.

If there is an issue with the search selection, for example, I have been pushed down the list because I have written non-fiction rather than non fiction, in my skills and the search criteria only matches the latter, then I can change it.

Here, not only is the list hidden to me, but it is also partially hidden from the client, and that's what I object to. Particularly since no effort is made to advise us as to what the criteria are. For example, we had a discussion on Elance, which I know you had on oDesk, relating to English speakers living in non-English speaking countries, being red-flagged as non-native English speakers.

If this kind of criteria is still being used...then I'm on fizz mode (again)

The other issue I have with Upwork is when it comes to its keyword search matches anyway. They are ridiculously poor compared to other sites and I suspect the distribution is somewhat condensed because of it.

The default sorting option for the applicants list is "Recommended for this job." The client can easily sort by other options shown below: 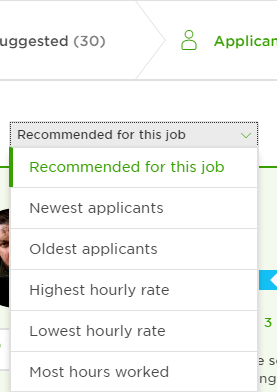 Thank you for advising freelancers what the sorting options are for the Applicant's List.

Conspicuous by it's absence is Number of Jobs Worked.

Repeatedly, freelancers, like  myself, who do many "fixed priced" jobs are being unfairly disadvantaged by Upwork by not having the Number of Jobs worked displayed on the summary Profiles and, now that it is known, on the sort criteria.

We told and told again that a change is "in the works".

The default sorting option for the applicants list is "Recommended for this job." The client can easily sort by other options shown below:

Thanks for the speedy reply.

Oh dear... that's my worst fears confirmed. Our proposals pass through an algorithm by default for sorting. We have all experienced the efficacy of the Upwork algorithms and we all have our opinions on how effective they are.

Please, please, please can we have the default display changed to by date of application.

Having our proposals displayed by default in the order that Upwork deems fit is not fair at all.

The time we all spend crafting decent proposals is valuable. To find that our proposals are thrown to the mercy of an automated algorithm is not acceptable.

With the vast amount of fees I have paid to Upwork over the years I expect my proposal to get to the client without any sorting by Upwork algorithms. I want my proposals to go straight into an Applicants list ordered by date.

The client can then filter them as per any Upwork options as they wish. At least we will know that they have been initially presented fairly.

In my opinion - when a client clicks on the Applicants menu they should be presented with a list of applicants sorted by date of application. The Upwork options for sorting should be available AFTER the applicants have been displayed by date.

I agree. I think they should be sorted by date first and then selections made.

I find the whole thing frustrating. Upwork are not an employment agency. They don't have the skills to do it. They do not have the capacity to recommend anyone. Yes, you might get a few matching skill sets, but those matches are only as good as the system identifying them - and that is very poor. Go on the skills section and try and find matches for alternative medicine or complementary medicine, men's health, women's health, children's health - they simply aren't there.

If we ask how the Recommended criteria are made up we simply don't know. We aren't trying to game the system, we are trying to get equitable visability - for which all people pay equally. And to keep some proposals hidden behind a different tab simply doesn't allow for this.

Sorry, but Upwork are not in a position to essentially sift applications.

"Please, please, please can we have the default display changed to by date of application."

No way. The algorithms love me. I love the way it works.