» Forums » Freelancers » How to cancel a contract
Page options
Options

How to cancel a contract

I have accepted an offer. However, after reviewing the NDA, I decided not to go ahead with it. What is the best way to cancel the contract now? I did not work any hours and I did not get anything paid.

It's best to communicate with your client before taking action and ending this contract from the contract details page. 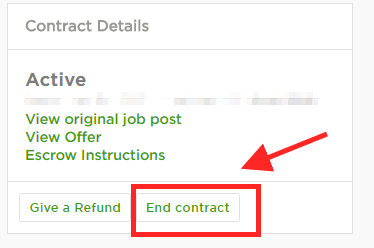 ok thanks. do i have to state the reason from the dropdown list? or can i do it without it? If it was mutually agreed to cancel this job - what is the best way to do it so there is no impact on rating/profile? thanks

Community Manager
In response to inkogan

You'll need to select the reason for closing the contract. Note that only a pattern of contracts without payment will affect your score but the effect this contract will have depends on the private feedback your client might leave and the outcome of your other contracts.

Go to "My Jobs" located on the upper toolbar.

On the right-hand side, you will see a small button that reads "Cancel Contract".

Just a little reminder that the job will count as an unsuccessful contract, the client can still give private feedback, the Rising Talent Status may well be lost, and it will drag the JOb Success Score down when it is calculated.....

I was in the same situation as yours. I had accepted a contract and then the client asked me imposible and absurde things. Also he provided me arabic wordings to work with, not even translation to those wordings, anyway a verry wierd client. What I did, I canceled the contract beofre chargning the client, and surprise! I lost the Top Rated and my JSS droped below 90%. These really sucks...

There are many reasons to cancel a contract.

In actual practice, an NDA should rarely be a reason for doing so.

I have been asked to sign dozens of NDAs while working on Upwork.

I do read them. I never really care about anything I see in them, because my own confidentiality and privacy and ownership practices are already far more client-friendly than anything in these NDAs.

So they don't ask me to do anything I wouldn't already do.

That's why I say GENERALLY, an NDA is nothing that would change my decision about going forward with a contract.

I have found that the people who ask me to sign NDAs have rarely read the NDAs or know what is in them. Most of the time, they were simply asked by somebody else (maybe somebody in th legal dept.) to have freelancers sign them.

Even if they kind of know what's in the NDA, they didn't write them. They found the NDAs on the Internet or were sent them by somebody else.

Even if an NDA has something crazy in it that you can't accept, it doesn't mean you need to cancel the contract.

You could highlight the section or sentence in the NDA that you can't accept, and you can send that to the client and point it out, asking if that can be removed.

Tell the client you will be able to sign the NDA if that portion is removed, but you can't sign it with that part still in it.

If the client removes that part, and sends you a revised NDA, you can sign it and move forward, earning money from the contract.

Team Spotlight: Pradeep H, Community Engagement Specialist
The Gift of Gratitude
Protecting Yourself From Taking on Too Much Work
Team Spotlight: Val, Community Engagement Manager
8 Books That Changed My Life
Upcoming Events
Advantages of Being a Freelancer & How to Find Clients on Upwork Upwork LIVE
Catch | Health Insurance and Payroll for US Freelancers Upwork LIVE