Re: I want to see competitors

You ability to understand my last post is disappointing.

Bowie is not a political rock star.

No one cares about suffrage in Great Britain in the late 19th century.

No one cares about the what that song means. Only Bowie will know.

It was 1972 and you probably weren't even born. It was a time albums were like novels and songs were like chapters.

We didn't have the Internet. we had a piece of vinyl with a album sleeve. If you were lucky you could see him in concert or hear a song on the radio. ROCK Music at that time was driven by England and the US. Not sure how you relate to the cultures of those countries by Googling a word in one song 44 years later.  Say to yourself... 44 year later.

My music taste varies the Clash to Israel Kamakawiwo'ole. No one likes David Hasseloff music in the US. It was joke.

But how would you know, you have to Google 1972 music lyrics trying to be clever on a post that has nothing to do with you.

Competition? This is not some fortune 500 company. Its Upwork. Freelance jobs for people who want "Graphic Ninja's" for a white belt price.

I leave you with this Jan.

What song did these lyric come from?

OK, Stephen, just stop right now. You are the one who made a connection between femininity and lameness - what I find wrong. And if you joke - those don't land well. You know that joke suppose to be funny. The only remotely funny here is how you slipped Bonnie Tyler insted of that one take  Berlin trilogy marvel with similar name. I used to DJJ, so I know what I'm talking about.

Mods however seem to see threath in  word Frock instead of casual misoginy or femme bashing.

Like I said, I want to stay here on topic. So yes, frock the competition, let them wear garments and hail satin!

Good heavens Jan, loosen up! I am a woman and I certainly do not see myself  as part of  a minority group (which globally we are not, if Wiki statistics are anything to go by) that men have to feel guilty about.

There is inequality everywhere, but historically, you will see that although women might be paid less or get a bad deal (and I am not belittling that) in some sectors, they are driving forces in others.

I think Stephen's intention is one of irony not of cruelty.

Put your headphones on and dig this.

A Frock is a Victorian garment. The Victorian age was rigid and conservative.

I was amazed a fellow community member got glowing feedback but got a 4.0 rating.

I find that harsh and unyeilding. Like the Victorian age. Get it?

Now turn up Moby and let those Beats Headphones take you away to your favorite Rave Memory.

This is were i drop the MIC, aight. 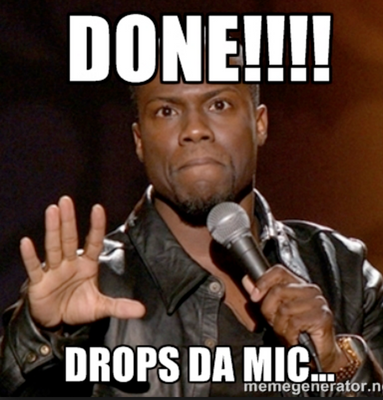 Pick up your mic and your explanation and let me debunk you some things. It took you few post to explain yourself. OK.

Victorian age as stiff and uptight, meanwhile in Paris and Vienna is whole another story.  See under phyosophy and art of said era.

This new feature on Upwork is actually very thoughtfull for folks like you so you can save your nerves. Probaby the job is gone to some hardworking freelancer and you can do nothing about it.  There are various way to check your competition. you can spend hours surfing upwork profiles. And guess what? They are from all around the world, not your fairly narrow Murica.

I said fair and square why this feature missing is not a problem at all. It is easy, get job, do job, get paid - done. Rinse and repeat. No moaning if someone won a job over me. I already know that some clients are horrid, but guess what? I find it more like a lottery than some strict science. are some freelancers better than me, yes they are, are some worse - SHURE*.

Well, when we were able to see who's bidding, we had troll fest that third country freelancers are unfair competition. Now we don't see that. So the trolls are now resorting to assumptions. I find new new feature beneficial for community in whole, We have other methods to screen  clients and as far as I know we can still see what are clients preferences in hiring by looking in past jobs and jobs in progress. As I said before, and I am forced to repeat myself across the threads here, freelancers that are focused on on other freelanceers are not doing themselves any favors. We can see that also here. It is easier to belittle another peer than to really see if that feature was doing us any good.

I find blaind bidding the fairest way of bidding - it gives you feel that you are alone in this. I guess, freelancers nowadays miss that stalking/monitoring the job post. You can see who won the job, who applied etc... Personally i don't buy an argument tha it helps in developing oneself as freelancer here. Aftr 30 jobs bids a month you forget most of them. I wonder if you stumble onto someones profile here, you go like; "A-ha, that is the one who won the job that I had applied!"?

So if this feature gave as a bit of fairness while bidding or even reduced the number of profile ripping/clonig - I am all for it. Perhaps, I'm different, but I don't stalk anyone and I don't mind if someone else gets a job. The only valid and somehow sentimental argument given for the the missing feature is Razvan's about hhow it makes this place a bit lonely. I get even the argument if you are new here so you'd like to adjust yoursel to your competitors. But the rest are pettinesstoward specific freelancers who I don't find blamable for job bidding.  Because, freelancers gonna bid. Subtext is strong, so you have to figure the rest yourself.

I think a lot of these posts are going to get deleted when a moderator comes along.

No harm no foul.

Jan is right. I stand corrected.

Just a debate over music and dress styles.

I think i have made a new friend.

For some friends here, looking at bids, stalking, etc,  is a waste of time you should spend working. But they prefer to invest their own time on flame wars, assumptions and other "technical" activities.

I thought I was getting paranoid with the bid issue, but after some comments, I feel very healthy.