I am pretty (totally) ignorant of many things to do with computers. I can operate them but how they actually do what they do is beyond me.

I would have thought that there would have been a database where contacts are stored and any information that was entered in any of the Upwork reports would have come from that common database.  But I don't know.

So, when I see inconsistencies I wonder how they could occur.

Below are 2 screenshots of the same two contracts. 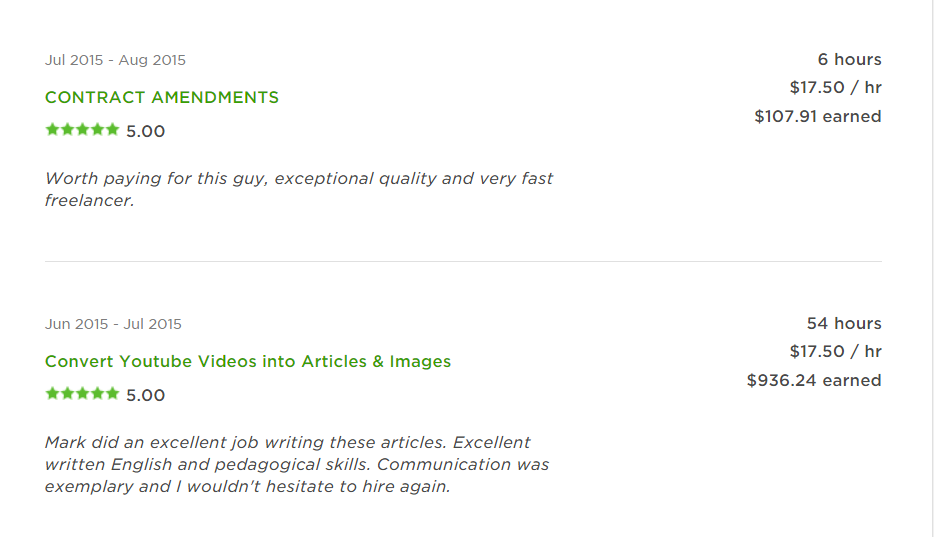 The dates on the contract report are correct.

There are others with similar inconsistencies, these happened to be the latest two and caught my eye.

Probably in the great scheme of things it doesn't matter too much, in this case, apart from when the JSS is calculated in the 6 months, 1 year and 2 year segments. But if something this simple can be so obviously wrong, how much faith can we have in any other figure that Upwork produces and relies on?

This is a bug that was reported almost a month now, so I assume it is being worked on.

As to the effect on your JSS and our confidence in the calculation, I brought it up in the thread below. Valeria responded that it did not affect the score and was only cosmetic.

You can view her response here

but best to scan the entire thread.
---- easy like Sunday morning ----

I did look through the older posts but couldn't find anything.

Yeah and it still isn't fixed either which is annoying. Makes me look like I have only had one job in 2 months when in fact the last one ended last month.

Suzanne, probably it's not yet fixed because it's only affecting some freelancers. In my case, dates shown on my profile page are accurate.

Probably but it is like my ticket which has been open for 2 months because my feedback on one job says "The freelancer has made this comment private" it isn't important enough to fix since they say others are not having the issue, but other's have posted this issue so it is not just one or two freelancers. It makes me look like I have worked since June, which two of my last jobs ended towards the end of July not June.