Miroslav, I think you're absolutely right

Just like the payments have a security period, perhaps contracts are counted towards the job success score after a certain time period - just like the option to view feedback left if you haven't given any ( after 14 days ) or receive an escrow deposit if the work hasn't been approved ( also 14 days ).

It's just sad that things like that aren't clearly stated and we have to bang our heads in order to figure out how things work - the JSS is a mystery even Scooby and the gang can't solve! 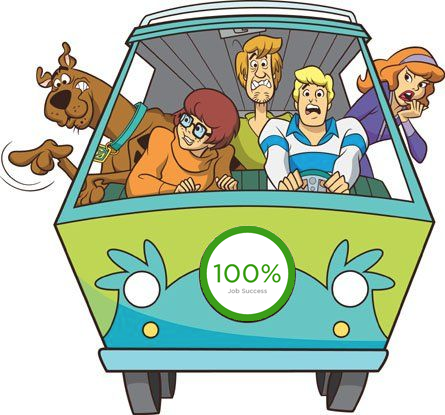 You perfectly got my point. Also, don't forget  that even feedbacks are subject to changing for some period after the job has finished -- and the feedback is one of few key variables which certainly count into job success calculation.

Can some one tell me reasons?


This is my first time to post here and just would like to share something with regards on how awful is the JSS calculation in my opinion.

The scenario was a client that recently hired me for 2 hours for a Lead Generation Task. Basically, a trial task. After submitting my work output. He immediately ended the contract and gave me a score of 4.60 without giving me a feedback about my work.

Then I decided to message him and asked him politely if where did I go wrong in the task. Luckily he still replied, to found out that the leads that he was looking was not indicated on his job posting and instructions. So I messaged him that what he was looking was not indicated in the instructions. He acknowledged that he made a mistake and decided to change my feedback from 4.60 to 5.00 and acknowledged that I deliver the leads according to his instructions.

Due to that incident, my JSS dropped from 100% to 95%. So I contacted the Upwork Chat Representative(happened last 2 weeks) to file a dispute with my JSS. Although he changed my score from 4.60 to 5.00, the private feedback that he gave might be the cause that lowered my JSS. I told her that client made a mistake on his instructions and acknowledged it, changed his feedback to me from 4.6 to 5. She said that I should wait for 2 weeks inorder for my JSS to update.

After 2 weeks. Today I checked my JSS again and I was surprised that it did not move despite the update that he had made and other than that, I have finished another 5 star job completed task from a returning client. I really expected that my JSS will increase.

Again, I contacted the Chat Support Representative and emphasized that my JSS went down due to a client that gave me a 4.60 score but later ackowledged his mistake that his instructions were not clear and changed my feedback to 5. Since private feedback cannot be changed, I told that Chat Representative that I could submit a series of screenshots of our convo to prove that my client acknowledged his mistake.

I was disappointed when he gave me canned responses, told me that maybe the reason was because of my previous clients private feedback. I told him that if that's the case, it could have already lowered my JSS before the incident happened because all scores that I received from my clients are all 5.00. Though I have one 4.60 last year and my JSS was down to 88%, I managed to bounce back to 100% after a couple of contracts that gave me a 5.00 score. So I think that the private feedback is not the issue for the last 24 months.

I really tried to make the Chat Rep understand that client made a mistake in his job post instructions and acknowledged it, changed his score from 4.60 to 5.00 but already leave a private feedback which he could not change.

After the long chat that we had, he just spilled it out that JSS cannot be disputed(Even it was the mistake of the client and ready to submit supporting screenshots of Convo). Please see screenshot below.

It really make sense now. The JSS calculation is a one sided in favor only to clients. You work hard inorder to have an outstanding profile and there will be one client to screw up your profile then BOOM! you will have a hard time to increase your JSS again or worst your freelancing career will be over. I know 95% of JSS is still high, but it's not really fair when Upwork won't dispute or give favorable solution in some cases like this because it was the client was the one who made a mistake.

Perhaps the Upwork Management Team will somehow tweak their rules with regards of the JSS calculation. Too bad that the good old days of oDesk is just now a mere memory  ;(

Have a great day everyone and thanks for reading.

Errad, it does seem unfair. However, your profile is so strong that I don't think this blip is going to affect your getting jobs, or stop you getting back to your 100% rating. I have just looked at your profile and the rating is already up to 96%. Everyone hates the JSS - but we have to live with it for the moment - move on. The drop might be due to something else altogether.

The reason why the score doesn't necessarily go up with more (well-rated) closed contract could also be because at the same time, older (well-rated) contracts drop out of the time window.

While I understand your frustration, I also see why private feedback can't be changed. For one, the whole "freelancers badgering clients and/or CS" would probably be immense (again). Also, the score is there to meassure one simple thing: Was the client super happy, kind of happy or not so happy with the overall outcome. Yes, this outcome can be influenced by both parties (as in your kind the incomplete instructions provided by the client). But it's really "just" the overall outcome that counts.

I'm not saying I necessarily like it the way it is, but it is the way it is. As the freelancer, it is therefore wise to have all kinds of "safety valves" in place, e.g. asking the right kind of questions to ensure the deliverable that the client expects.

Last week, my job success score was 98%. Today, it's 96%. Since last week, all feedback I've recived has been 5-star with either no written comments or positive written comments. I have opened a few new contracts with clients, but they've only been open for a few days so there hasn't been any oppotunity for anything to happen yet. It doesn't seem like any of this should lower my score.

Yesterday, I also closed a contract that has been open since November, but that hasn't been active except in the first 2-3 weeks it was open.  The client hired me to create internship application materials to apply for a particular internship. When the job was complete, she opted to pause the contract rather than end it "just in case" she decided to apply for additional internships and therefore needed further cover letters. She hasn't answered a single communication from me in the 3+ months since she paid me (either by Upwork messenger or email), and to de-clutter my list of open contracts to make it easier to find the ones I need, I figured I'd end the job. I contacted her and told her I wanted to close the contract unless I heard from her that she needed more work; two weeks passed without a response, so I closed the contract. I left the client 5-star feedback, but she didn't leave any for me. (Of course, it has only been 24 hours or so...but given her poor track record of post-job communication, I don't expect her to leave any.) Could that situation result in a 2% hit? And if so, are we really just supposed to leave contracts open forever, despite the impracticality and pointlessness, all in service of preserving our job success scores?

Another possible factor. I have an open contract with a milestone that had a March 1 deadline. I didn't submit the milestone, and haven't been paid for it, because the client never provided the information that I needed in order to start writing his resume. I've followed up with him every single week, and every week he says he still wants me to do the job, but he "doesn't have the materials yet." Could THIS be the result of my 2% hit? I don't think so, since it has been 3 weeks since that "missed" deadline, but...?

And yet another possibility. One of my Elance clients opened a contract with me 5 or 6 weeks ago because he has changed jobs since I originally wrote his resume, and hired me to add the new job to his resume. Then, he dropped off the face of the earth without providing the materials, so I haven't logged any time for the hourly contract. He has not answered any of my Upwork messages, his website has been taken down, and emails are bouncing. Could THAT job be bringing my score down? If so, do I close the contract, or will closing it without logging any time/getting any pay create a further dent in my score?

Whatever is going on, it doesn't seem to be the result of anything I've done, and that's frustrating. I know that the job success score is a huge mystery and I'll never know for sure what influences it, but it is maddening that clients take these numbers so seriously when they clearly have no real meaning. I don't think that a single situation described indicates that a job ended "unsuccessfully" because of anything that I did, but the score is supposed to reflect my ability to successfully complete a job. Grrrrrrr.

PS: I know that the formula is under lock and key and nobody has an official or verified answer, but I'm hoping that some of you have enough anecdotal experience to make a logical guess at what is going on. I haven't amassed enough of my own anecdotal experience yet to make an educated guess. I'd like to draw on everyone's expertise so that I can avoid doing whatever it is that I did to make the system incorrectly think that I messed up.

I know that private feedback has a lot to do with it. I received my first JSS 2 weeks ago. 5 closed contracts (4 with 5-star feedback and good comments + 1 closed contract with no feedback) as well as multiple ongoing, long-term contracts and my JSS was 88%.

In the last 2 weeks the only thing that's changed is 1 closed contract with just under 5 stars, but now my JSS is at 100%. I have no idea what would have made it so last time, and how it could have jumped to 100% with such a small change, but I'm happy it did.

I can definitely understand your frustration, but right now I'm just running on a 100% high and I don't want to anger the JSS gods haha. Hopefully someday they will either get rid of it or explain it better.

So it turns that JSS  changes actuallz update on the second status date after an achievement is made. Last weekend score doesnćt seem to take post-March6 success, just before.