It seems to be new trend started amoung clients.

Clients always try to fund less amount than in milestone. But they never talk that prior to fund . There is no point of setting milestone or new way that UW implementing when it comes to freelancers .

Freelancers like me don't like to argue with clients. But have a bad feeling about this before starting a job.

I feel this method brings more negativity to freelancer's mind and discourage . So it might effect the quality of outcome ( ex: Let's say , Client get 85%, but 100% easily achievable ) . 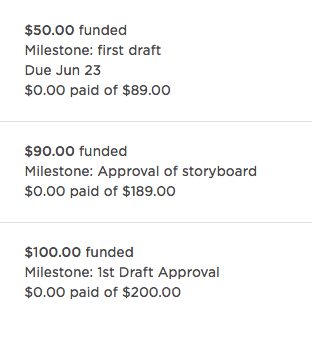 "Remember, no matter where you go, there you are."
Buckaroo Banzai
2 Kudos
Reply

I've done few hundreds of fixed rate jobs and never came across something like this .

Kalaani - These clients probably got away with doing that so why stop if they can get away with it again.

Always make sure that EACH milestone is FULLY funded for the Correct amount BEFORE you start working on it. Because, if you don't, no matter what was agreed on, you will only get what's in escrow when you complete the job/milestone.

What we're talking about here is a *contract* not being fully funded.

There is nothing wrong with contracts that have several milestones, there is also nothing wrong with clients setting up milestones and funding them as they go along in cases where this makes sense, such as where there are clearly defined deliverables per milestones, rather than fuzzy stuff which essentially leaves the client with the deliverable for the whole contract against just one funded milestone. That's where we have to be super careful we don't give away the whole cow when all that is funded is a liter of milk....

Unfortunately the lines can indeed become blurred as to where it makes sense to have a number of sequential milestones - for example when there is a translation of 10.000 words, it's fine to cut it down into two milestones of 5000 words and only fund the first one, get the first 5000 words, release the first milestone, then fund the second milestone of 5000.

What isn't fine is to set up and fund one milestone for half the amount and expect the whole 10.000 words, with an unfunded 2nd milestone called "final delivery" or something like that.

In short, a milestone must be in line with the deliverable and not beyond, and freelancers need to be careful not to hand over work beyond the funded milestone.