One of my client asked me to open up an account here so that he can pay me through here. He invited me to his job and I have accepted that. No problame there. But after I have made my profile and done submitting, it just comes out and says

Can the moderators help please ? This is my profile.

so this the 9th time I have re submitted my progile (each time changed something). And instantly I get this auto message in gmail ,

colettelewis
Member
In response to kaiyes

What is wrong with Upwork that it keeps refusing qualified freelancers? It lets in millions of people wanting to do data entry, many of whom are simply scam bait. It is incomprehensible

csjarmitage
Member
In response to colettelewis

I'm surprised there isn't a streamlined process for freelancers that are specifically invited by clients.  Is that the case?

Speaking practically, there may need to be a dollar threshhold.

Because, otherwise, the system could be rigged.

"John X" is really not very skilled, but "John" wants to be a contractor on Upwork. "John" knows that Upwork is cracking down and rejecting would-be contractors who have little to offer.

So "John" creates (on his own, or with the help of a friend) a client profile: "Fred."

"Fred" now invites "John" to do a project.

Because Upwork has a "loophole" that fast-tracks contractors invited by clients into the marketplace, "John" is now a full-fledged member of the marketplace, although he don't really deserve to be.

"Fred" pays "John" for ten minutes of work, a tiny sum, and is never heard from again.

So, in my hypoethetical scenario, using hypothetical rules and people, there is a system by which contractors invited by clients are fast-tracked into the marketplace. But that system is being manipulated and used in a dishonest way.

But what if the system is unnecessarily blocking freelancers who really are being invited by clients and really should be fast-tracked to be able to work within Upwork?

So an alternative is this:

There still checks and balances. Profiles can still be checked to see if they are "offering skills that are in demand within Upwork."

But contractors can be invited to work a client's project without any difficulties, without really needing to "qualify." It's money for Upwork. It's all fine.

Then, if the contractor wants to access the general marketplace, they would need to go through the checks and be approved...

...but after a certain dollar amount, Upwork just figures, you know what? They paid their dues. This isn't a sham contractor/client relationship, or even if it is, it netted us this much money, so it's worth it to us to let them in.

A dollar amount could be set high enough that it would realistically filter out all or nearly all sham hirings.

For example, if an invited contractor earned $1000 working for a client, then that's $100 (ten percent) for Upwork, and that's going to be a lot more money than an unqualified wannabe is going to spend just to access the marketplace.

This is why we can't have nice things.

So I guess I will have to wait until I make my first $1000 from this one client ?

Or ~$200 will suffice for now? Because thats what my current client's deal with me is !

I have no idea. I was postulating a hypothetical rule. I don't know what Upwork's actual policies are in this matter.

Well, I can access the job I was invited to. I was able to accept the invitation as well.

Problem is, I can't make proposals to any other job.  It comes and gives me the error message below. Since I was able to accept my client's invitation, my progile should now be complete, at least thats what I thought. But why do I have this error then ? I have completed everything !!!

This thread is very informative, and I'd like to thank you for sharing your experience with us.

You were invited by a client to work through Upwork. That's all working fine now.

I hope you'll be able to become a full-fledged member of Upwork's contractor community.

How much time to do you want to spend applying to other jobs, when you have an hourly contract with a current, paying client?

You have a great advantage over most new contractors, because you already have a contract. One of the best things a new contractor can do to get hired is to complete jobs and gain some hours of experience.

Thanks for clearing this up, My current client's work is only 5 hours/week @15/hour rate. So I think I can work a bit more !

As for the other question, I have already delivered  more than $100 dollars worth of work for my client outside upwork. He wanted to pay me through upwork so I came here to get payment.

Upon coming here I saw other jobs that are worth applying for.

I wanted to collect at month's end, but should I tell my client to pay now ? Will an amount (~$100) make me a legit contractor ?

yitwail
Member
In response to kaiyes

You're a self-described full stack web developer, your profile has a portfolio, you're educated, your english is fine, you passed some tests, AND there's a client who wants to hire you, so I'm frankly mystified that Upwork thinks the 'marketplace does not have opportunities for you based on your combination of skills and experience'.

colettelewis
Member
In response to yitwail

There has to be a glitch somewhere. There have been a lot of odd things going on with people's profiles recently.

kaiyes
Member
In response to colettelewis

okay. I have logged 5 hours of work manually since I have already delivered my client 6 hours of work. As he has set it up as 5 hours/week, I cant bill him more than that this week.

5*15= $75.  I wonder if thats enough for now to make my profile accepted. Or will I have to do this drill for couple of weeks.

Thing is, for a long time my clients/co-workers have been telling me to get on this upwork platform. But since I already have enough clients and I have established proper transaction pipeline with them, I was reluctant to even sign up.

But coming here I see lot of good work that are being posted and are kinda easy for me. For example there is this one job that asks for a social network type web app to be made with meteor.js and must have notifications, ,twitter like following features and chat messages. I already have a web app like that made with meteor and even listed that as my project.  I guess that would be one easy job.

I have found other jobs that I currently do as hobby, like video editing. I shoot and edit documentaries as a hobby and looks like there are lot of simple video editing jobs !!

But I can't make a proposal on any of them because upwork thinks I am a fraud !!

re: "But I can't make a proposal on any of them because upwork thinks I am a fraud"

I don't know that Upwork thinks you are a fraud.

In this thread, people (myself included) have speculated about why your profile has not been approved to access to general marketplace.

A lot of this is speculation about the general process. It is not necessarily about you. And I don't think Upwork has said anything you should interpret as an accusation of being a fraud.

This thread explains a lot.

But I think the most important bit is this: 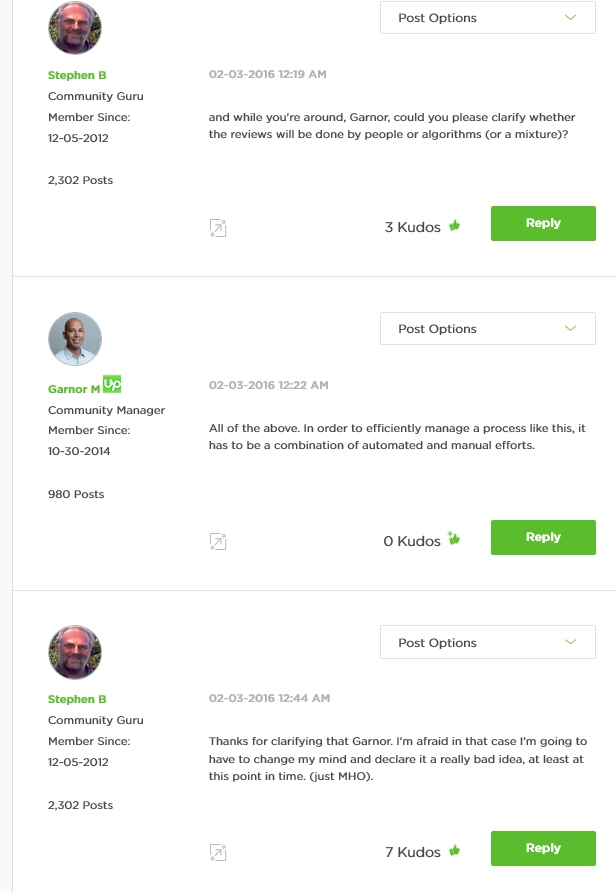 tlsanders
Member
In response to prestonhunter

It's worth noting that we have seen a handful of other cases in which a contractor was actually qualified, got caught in this loop, came to the forums and a moderator (after comments from a couple of trusted veterans saying "Wait..you're not who they're trying to screen out!" apparently intervened and the profile was approved.

The overall process definitely needs improvement, but it's possible that simply by having brought his qualifications to light here, OP will achieve a solution in his individual case.

katrinabeaver
Member
In response to tlsanders

It's worth noting that we have seen a handful of other cases in which a contractor was actually qualified, got caught in this loop, came to the forums and a moderator (after comments from a couple of trusted veterans saying "Wait..you're not who they're trying to screen out!" apparently intervened and the profile was approved.

The overall process definitely needs improvement, but it's possible that simply by having brought his qualifications to light here, OP will achieve a solution in his individual case.

You are right he did find a solution he has now worked 3 jobs here recently.

"Fairness is giving all people the treatment they earn and deserve. It doesn't mean treating everyone alike-Coach John Wooden"
0 Upvotes
Reply

tlsanders
Member
In response to katrinabeaver

You are right he did find a solution he has now worked 3 jobs here recently.

Weird, I didn't see how old this thread was. It was on the front page for me this morning, though scrolling back I don't see any new posts.