I just passed 100 jobs on UW which has taken a few years and a lot of work. No acknowledgement from the powers that be. Can't say I lost any sleep over it but what about something to mark milestones like 50 jobs or 100 hours worked. No fees on your next three jobs? Free connects?

You may be right!

Or X years or something...

It's something to aim for

Upwork is not your employer. I don't recall Amazon emailing me with thanks for spending a bizzilion dollars on their site but I do recall an email from them telling me Prime membership costs are going up.

I do understand that different people have their own notion and needs around being appreciated. I am not trying to make light of that, but at the same time I am running my own business and I understand the mutual value UW and I bring to this relationship. I don't need an auto-email sent to me about it although I have gotten emails from UW for different things and some swag as well.

Rather than a milestone celebration I'd rather they build in a model that truly incorporates what a "Top Rated" should be. For example when they moved to a 20% fee for the first $500 they talked about needing to do that because of the cost they bare on contracts in terms of customer service, disputes, etc. In isolation that seems fair but we don't operate in isolation. The reality is that most experienced folks here rarely if ever use CS, have never had disputes and never leave a client feeling badly about using this platform. Yet we pay the same rates as someone who stumbles onto the site with no experience, some how finds a client, and then proceeds to do everything wrong. I guarantee you that the revenues coming from that increased fee are being paid primarily by the very people who present the least amount of risk - and the most amount of value - to Upwork.

The 20% thing is just an example and not the whole story. Net, I would gladly forgo thankful emails, water bottles and connects that I couldn't use in multiple lifetimes. Instead spend a bit of time revamping "Top Rated" into something that is meaningfully different. That more than anything would serve as a "reward" to those who have worked hard to not only build their own businesses but also help make UW what it is today.

Yeah, they sent me some stuff last summer--a handle thing to stick on my phone (which i"ll never use in a million years) and, I think, a decal? I don't care about that stuff. (Although i wouldn't sniff at a nice coffee mug or non-BPA water bottle.)

I'd love to see some kind of reward system for who can earn the most money using the least connects. The quarterly winner gets a 5% fee reduction on their next $500 earned. If not that, then let me redeem my unused connects for a coffee cup.

I see I'm not the only one who secretly yearns for one of those fancy coffee mugs!

I see I'm not the only one who secretly yearns for one of those fancy coffee mugs!

I must say I do love my Upwork mug.

I's just the right size,  holds coffee warm for ages and survives being knocked over by cats. 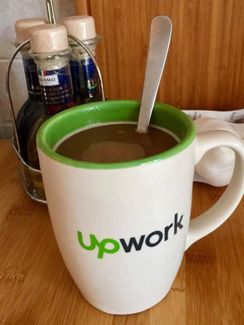 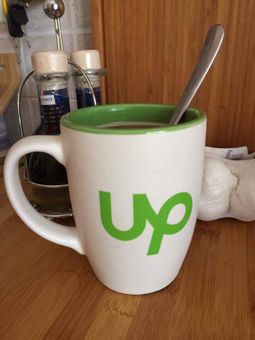 Beginning Your Freelancing Journey on Upwork