Upwork needs to be FAIR to all freelancers

Hidden list. I don't see any hidden list on my client's page when I look at the posted job screen. There is an archive tab where I can put proposals manually if I want, but no hidden lists.

Thanx Rene K. Perhaps you can clarify for me what exactly the proposal page looks like and how it works for clients?

Here it is, redacted. This is after a provider is hired, this is why the Applicants tabs shows 0 (all applicants but the hired one are moved in the Archived tab once the job is closed).

Also, as long as nobody is hired, the applicants are listed below. Once one applicant is hired and the job closed, only the hired applicant is listed.

The Recommended flag is added by Upwork to the applicants with the best profile. I have no idea how they chose which one to recommend but I have to admit that it's pretty accurate.

Also, those applicants who are recommended are on the top of the list.

The Suggested tab is for people who have not applied but for who Upwork thinks they have a good enough profile for being invited by the client. This is what Upwork's algorithm thinks, and contrary to the Recommended flag set on applicant's profiles, this one is completely useless. 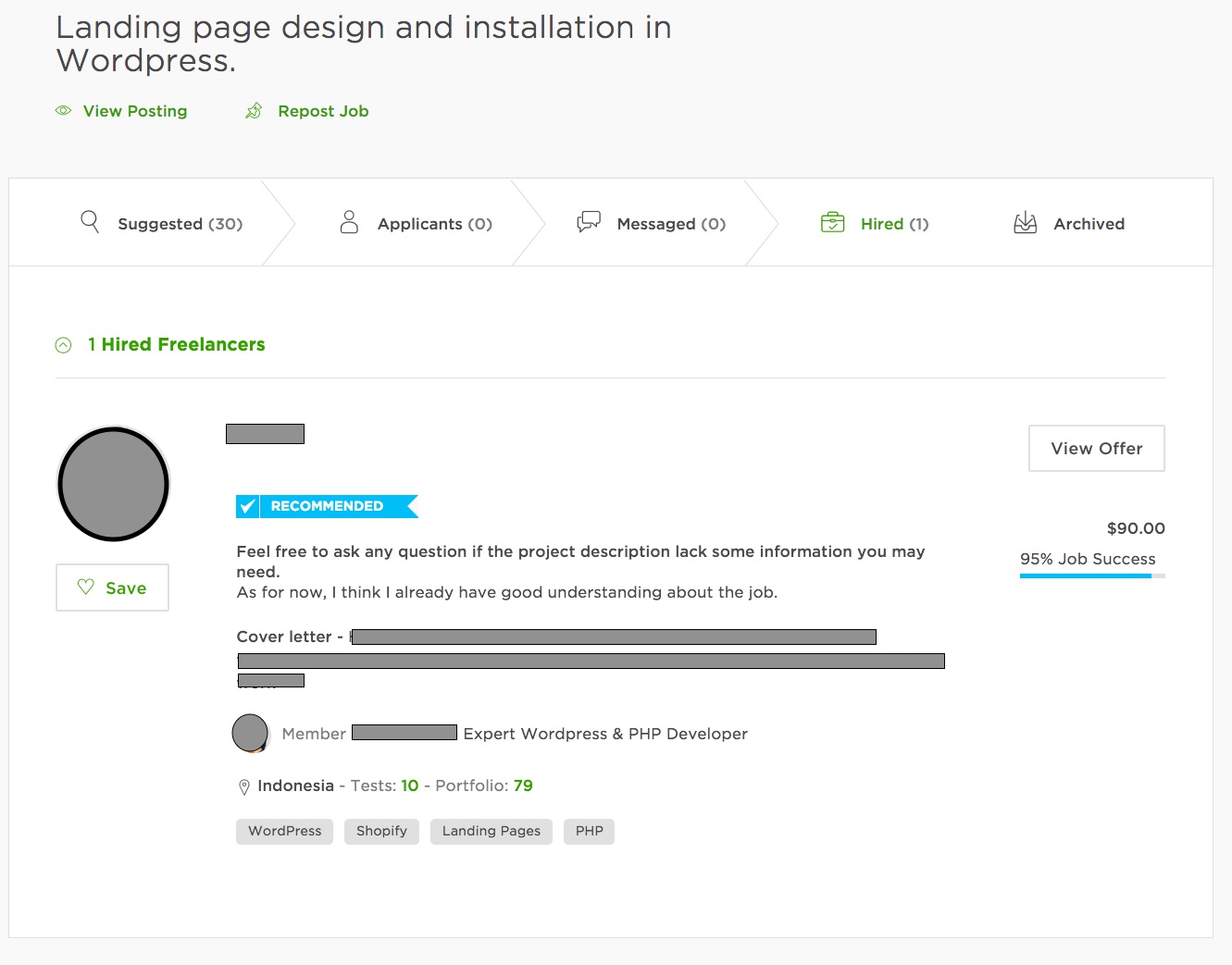 Rene k. I was more interested in the page that lists the proposals for a job before hiring or interviewing anyone. I want to know how the proposals appear to a client on the page of a job before they hire anyone. It is at this point that the "fairness" is requested because at this point we have all spent 2 connects. Do they appear in one long list as like in Elance? You say there is a recommeneded list at the top then the rest are below? Sorted by date or what? I didnt know about the "suggestion list". That just makes it even more ridiculous! We have spent connects and yet the system is busy 'suggesting" other people who have not even spent any connect? Wow! Now I see why jobs are hard to get on Upwork. Not only am I competing against many providers, am basically competeing against the system itself?

Isaac, look at the screenshot I posted, you are looking at the page that lists the proposals for a job before hiring or interviewing anyone. You can see only one proposal because in this case, I hired this person and closed the job, all the other applicants were consequently moved to the Archived folder. Otherwise you would have seen many proposals below this one. They are sorted by date.

They do appear in a long list, well it's paginated and you need to click on a button labeled View more to scroll further down every now and then.

As I mentioned it, those who are marked as Recommended are listed on the top.

As for the Suggested tab, it may show you good fits who have not applied and who you might want to invite. However, whatever algorithm is populating this tab, I'm not impressed by its accuracy.

Rene K, I think I get it now. The person on the screen is the one in the "hired" folder, correct? The "applicants" folder is the one that has all the applicants before you hire anyone? After hiring, they all move automatically to "archived" folder? I wonder how they appear in the archived folder? Is it in the same format as in the applicants folder? In a list by date of application? I wonder what info appears in the snippet? In Elance it was description, is it the same here? Do you have a snapshot with the archived folder? I also notice the "suggested" folder appears first and has quite a number of people in there! Talk about "influencing" someone's decision. I think Upwork tries too hard to be "helpful" they end up affecting the system. Elance used to work for me. Everyday was Friday. Upwork just is not working!

I think Upwork is planning on phasing out the hidden tab. At least, I remember one of the moderators stating this before. They were doing a trial run with a new layout for clients which they were going to eventually role out to everyone.

I don't know if they have done this yet or not but obviously they have done it for some people. Basically, this is a non-issue now because they are getting rid of it.

The Recommended flag is added by Upwork to the applicants with the best profile. I have no idea how they chose which one to recommend but I have to admit that it's pretty accurate.

Also, those applicants who are recommended are on the top of the list.

The Suggested tab is for people who have not applied but for who Upwork thinks they have a good enough profile for being invited by the client. This is what Upwork's algorithm thinks, and contrary to the Recommended flag set on applicant's profiles, this one is completely useless.

This helps answer questions in one of my recent posts - about the effectiveness of the recommended list and the suggested list.

So the good news is that the Recommended flagged applicants are pretty accurate.

I was worried that new Upwork clients might use the suggested list to invite freelancers and possibly have a bad experience. But if you say that the list of applicants has the recommended ones at the top then the Client will see them first.

The only possible bad experience a new Client could have is if they ignored the recommended applicants and just picked from the Upwork suggested list of invitees.

Having said all that - Upwork should not be interfering at all with the default list of applicants - they should be listed by date of application.

Recommended applicants should be under a separate menu.

Thanx Chris for that observation about the "suggested" list. In my view this is even worse than the recommended list. Why? Because these suggested freelancers have not even applied for the job in the first place like us who have spent time and connects applying for the job!

Human beings like to follow authority. It looks like when a new client posts a job, the system (which is the authority) tells the client - "These are the people I RECOMMEND that you hire and if from these you cant find, then I SUGGEST that you look at these freelancers over here". Are you kidding? Of course the new client will follow the AUTHORITY or advice of the system and go with what it has told them!

The easy way to partly solve all this concern and worry about the 'Recommended' flagged list and the 'Suggested freelancers to invite' list interfering with the application process is to:

Make the default list of applicants ordered by date of application - with no Upwork recommended best fit flags attached. This default list should be the most prominent on the page.

Have 'Suggested' and 'Recommended' lists under a separate menu at the SIDE of the page - less prominent.

Can we have a moderator push through this change as soon as possible please.