Re: What if most of us make more money with JSS?

The JSS is here. We won't know for awhile if it works, or doesn't, or makes any difference at all, but sitting around crying about it definitely isn't going to make the score go up.

I don't think anyone is crying about it simply because it's here. People are being critical about the way it was introduced and the way it's being implemented. Which is (technically) the way to improvements.

The JSS was introduced as a metric that will bring more transparency and accuracy to the feedback system - it's done exactly the opposite. The 5-star feedback had (has) one huge disadvantage and it was the way it was being presented / understood by clients - as a result a feedback of 4.7 - an excellent score in itself - was likely to cost you potential jobs. But the 5-star feedback had a precise formula that was public and could be found in the Help section - it showed you what's included and how exactly each component was being weighted. The JSS score doesn't have that. It has more components and larger scale than the 5 star but we have no idea how the numbers are factored in; without that it's pretty hard to understand what part of your performance needs improvement, so the JSS in its current form is essentially useless for freelancers.

As for its accuracy - I suppose the glitches and the erratic ups and downs will be smoothed out in time and it could be more accurate than 5-star. But will that mean it will be more useful in the marketplace? The new filter would allow you to sort freelancers by JS - 100%, 90%, 80% and so on. As a client, would you click on 80%? Because without context in most people's head that will mean 'oh they tanked a fifth of their jobs'. To me it looks like the JS will be presented to the clients in pretty much the same manner as the 5-star - only the topmost result matters, which.. same old.

And on that base my answer to the original question is that no, I won't be happy with a rise of income that might or might not be related to JS. Even if JS is the cause, as long as I have no idea how it's calculated, I will feel insecure that it can sink in any given moment and not give me any hints which component caused it to drop and how to fix it. If my business is going to rely on algorithms, I prefer to be familiar with them - regardless whether they're being beneficial to me in a certain moment or not. 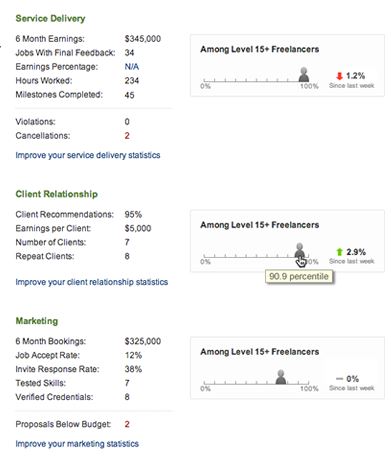 If liberty means anything at all, it means the right to tell people what they do not want to hear.― George Orwell
0 Kudos
Reply

For "job success," not so much. Elance's stats were even more skewed toward productivity and revenue than Upwork's seem to be; they also rather cheesily factored in whether one had a paid membership—a business decision irrelevant to clients and of arguable intrinsic value to freelancers—to "level" and search visibility.

I agree that the Elance stats were far from perfect, but at least we had a pretty good idea what was behind them. JSS is totally opaque. After today we can't even be sure whose JSS we're actually seeing.

If liberty means anything at all, it means the right to tell people what they do not want to hear.― George Orwell
2 Kudos
Reply

Ok, I stayed for a minute.

The better title would be,'What if most of us would make more money without five-star feedback, 'but ok.

I would still be against it and not so much due to the transparency issue (although that is huge one as well) but because I am against any form of intervention that sort of acts as a great equalizer in any system.

That type of action artificially makes all elements equal (in terms of the skills, quality, etc.)  which they are not. Sorry, but they are not. In the long run, that doesn't really help anybody-especially not that system. The best elements don't have enough incentives to remain best because: 1) they won't have any perks from it; 2) they will be even out with the average ones anyway.  And then, on their part, the average or weak elements don't have any incentives to improve : a) because they started to believe themselves that they are indeed 'the best' due to the system that is made to obscure the real  data; b) why bother?-because -see explanation under 2).

I would speculate here that this decision was probably motivated by less job activity on the site overall. They probably- for whatever weird reason- deduced that people are blocked by seeing two different numbers. I would even speculate further and tell that this awfully reminds me of Costco mayonnaise/marketing strategy (meaning just two types of mayo-classic small and classic large-no fancy olive, non-fat, quail mayo-none of that!) And it seems to me as that type of thinking was blindly applied to the freelancing market without really understanding it (And I definitely hope that's not the case!)

And btw that individual star-feedback blah, blah, doesn't hold the water. If data is dispersed to the point where you have to collect it, by scrapping through the whole profile and calculating, it is just unusable for all practical hiring purposes. Plus, if the latest one or two jobs were problematic, it will influence the first impression much more. Clients won't even look pass that, never mind that it was freelancer who had 150 jobs with 5.