What is stopping you from doing your job? 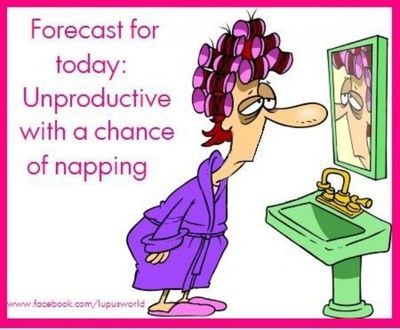 After reading all your replies, it seems everyone is having the same problem I have except Suzanne.

All lazy people out there let's celebrate. Jennifer will enjoy this: Pizza on me for everyone.

Suzanne lives on a farm and can take us in when we go broke. I'll even be nice to her cats.

That is the problem Ron all of them state they don't want to work ...

I had the best laugh here folks...Farm = work

No worries, with all that humanpower, we'll just build a commune on some nearby land.

Same as everyone else here. Have insomnia problems to begin with, so it doesn't help that I know I can put off work until 2 or 3 AM sometimes and still meet a morning deadline. Regularly murder myself by packing too many deadlines close together and then putting them all off until the big looming doom cloud appears just east of Wednesday. Still meet the deadlines, but I'm liable to coma-sleep like nothing else after.

Just this Thursday, for instance, I went to bed at 11:30 and asked my fiancee not to bother waking me up at my usual time. Woke up a few minutes shy of 14 hours later. Healthy stuff.

Pro-Tip: If you're on wireless and can do your work without an internet connection, just unplug it, for God's sake. Or use Cold Turkey. I do both (though it's the actual unplugging/turning on of the software that's the problem).

Favorite distractions: endless crosswords (NYT, Fireball, AV Club, and if you know those last two, you're probably incurable), HBO shows and Netflix docs (on a mean Ken Burns kick right now), Lego and hockey blogs (you know, because I'm a grown-up), and all the coffee, beer, bourbon, ribs, brisket, burgers, butter chicken, pizza, and fresh fruit a man can eat without throwing up everywhere.

The direct answer to "What is stopping you from doing your job?" is "I have no job to do." LOL

@Jennifer, I'm right there with you at the medicine cabinet! Ayurveda says to go to bed before 10 p.m.--haha WHAT?!

@Fergus, would love to be back on the list of busy people.

So today, I took 3 more Upwork skills tests (I think that makes 44 so far). I studied five foreign languages on Duolingo. And I actually took the step of setting up shop on a different freelancing site. Although once I saw what other people are charging for translation services (nothing), I'm not sure I'll get any hits there. I also worked on one of my $3-an-hour fixed-price jobs today. I really am trying!

Cats... Pizza... The company of kindred spirits... Working with animals on a farm... Sounds wonderful.

A brisk walk is always stimulating. I have one most days after my lunch otherwise I get lethargic and want to nap. But a walk after lunch I am ready to focus on my work again.

Over the next few weeks you may notice changes to Job Search filters that include the option to filter jobs by an hourly rate range and filter for jobs requiring multiple freelancers.

We are excited to share a new offering to enable freelancer job referrals (beta). This will provide the option to refer another freelancer on Upwork when you decline a job invite.

Having a professional profile is essential to attracting clients, highlighting your skills, and winning projects. Come and learn how to make your profile stand out on Upwork!